They come from afar

The village Vall de Santa Creu is crossed by many paths that allow us to cross the mountains of Rodes from a side to the other quite easily. The historicity of these paths is evidenced not only by Sant Pere de Rodes monastery, but also by Santa Helena and Sant Onofre churches, as well as the loads of dolmens that can be found in this zone. For centuries humans have been using these paths, crossing the mountains in all directions. But it’s been not only us. Also the birds cross them through their paths in the sky. This project begins with an initial parallelism between land routes and airways.

With all this in mind, They come from afar was a walk initated at Palau Saverdera with destination Vall de Santa Creu. The route passed accross many points that evidence the antiquity of these paths such as the group of dolmens of Fontasia, Sant Onofre church, Mas Ventós, Santa Helena church, Sant Pere de Rodes monastery and the stone huds that can be found around Coll Perer. While the walkers crossed the mountains, another group of people was waiting for them in an old vineyard at Vall de Santa Creu (ARBAR’s space), where Mar Serinyà read to them some words about our adventure coming from afar.

When the walkers arrived to the Santa Creu’s side of the mountain, they were divided in two smaller groups. Each of them would use a diferent path to get to the vineyard. Each walker had a bird assigned and he/she sang the birds’s songs whilst walking. Thanks to the shape of the mountains, all these songs could be heard at the vineyard by those who where waiting for us although they mostly didn’t see us. 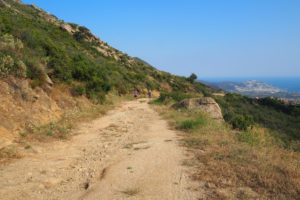 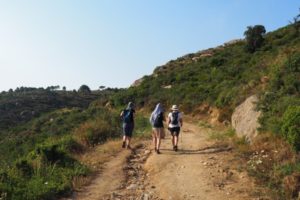 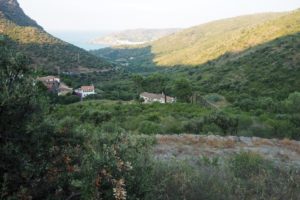 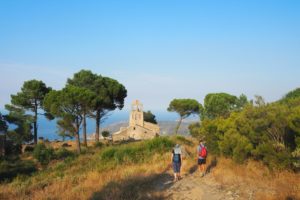