Installation for the hall of the Vic’s Universitary Hospital.

Within the context of the project “Art i Salut”, fomented by the departments of Culture and Health of the Central Catalonia, and curated by Pep Espelt and Miquel Bardagil.

The departments of Culture and Health of the Central Catalonia agreed to promote “Art i Salut”, a project that consisted in bringing an artistic installation to each of the four hospitals of the territory: Berga, Igualada, Manresa and Vic. The curators of the project, Pep Espelt and Miquel Bardagil, searched for four artists -each of those related to each locality- to work on a response for this project. I was invited to work for the Universitary Hospital of Vic.

The installation “Another breath” is based on a parallelism between the acts of entering and leaving a hospital and the acts of breathing. It has the goal of bringing a new, clean and healty breath to the equipment. Taking as a reference the tibetan flags known as Wind Horses, which are said to have their orations spread across the country when the wind moves them, for the commission of Art i Salut in Vic, these elements have been redesigned to produce a proper version of them for the hospital. To do so, new flags have been made using hospital’s clothes (from coats and sheets), its size is the same as some coats’s pockets, and the printed messages are not prayers but good wishes of health, hope, luck and strength written by workers and users of the hospital.

The collocation of the flags in the ceiling of the hall responds to the positions of a waltz that joins those who transit in this space. 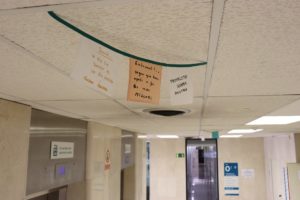 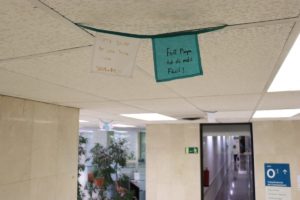 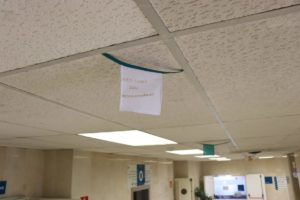 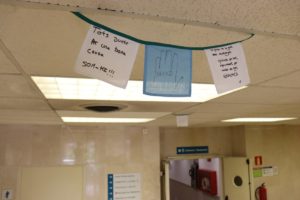 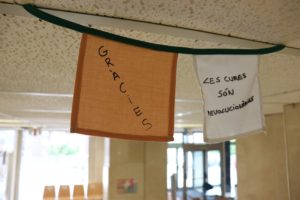 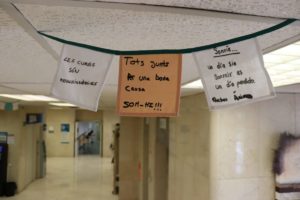 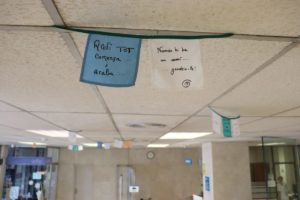 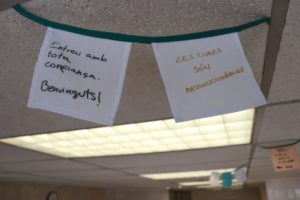 To those who speak of the lightning, it will fall near them The house and the wait